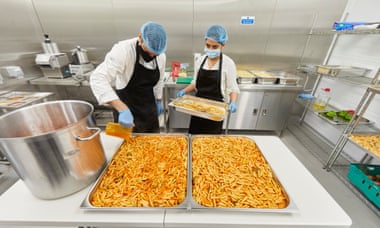 UNITED KINGDOM, October 27, 2020 (The Guardian): A charity that feeds millions of poor children in India has joined the drive to end holiday hunger in England and distributed its first meals from a new kitchen in Watford. Hot vegetarian dishes cooked for less than US$2.60 each using a model developed to feed the hungry in cities such as Mumbai and Ahmedabad were dispatched to a school in north London on Tuesday amid growing pressure on the government to reverse its decision not to fund free school meals this half-term. Trays of hot cauliflower cheese and mixed vegetable pasta cooked by chefs working for the Akshaya Patra charity, which produces 1.8m meals for schools daily in India, were collected by Kate Bass, the headteacher of Mora primary school in Cricklewood, from a purpose-built kitchen designed to cook 9,000 meals a day.

The charity is planning to set up similar kitchens in Leicester and east London and expects to keep delivering free meals to schools in the Christmas holidays. “It might seem strange to some that this model is imported from India,” said Bhawani Singh Shekhawat, the chief executive of Akshaya Patra. “But we are bringing a tested model from a country that has dealt with this problem with speed and at scale.” The charity also aims to sell meals to schools for less than $2.60 a portion – with half paid by the state and half by its donors.